Restorative Practice Comes to U-32 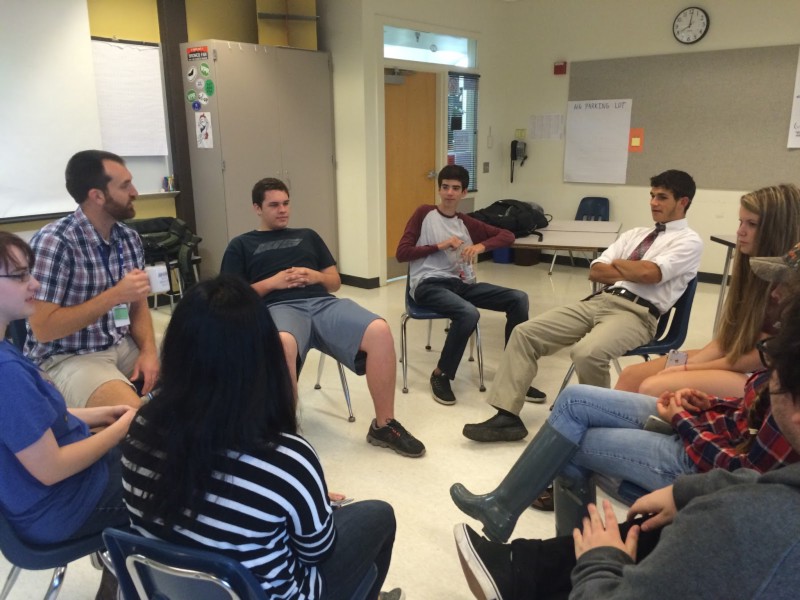 Every high school wants to have a positive climate, where students and faculty can feel open with each other, especially when problems arise. But how do schools go about creating that type of environment?

U-32 is making it happen with the use of restorative practice: a field of study that encourages repairing harm and relationships, healthier communication, and increased social capital in communities.

Assistant Principal Jody Emerson says, “The goal of restorative practice is to have students take responsibility, become aware of the impacts of their behavior on others and work to repair the harm. This puts students in a role of determining next steps, especially in what may have been a disciplinary process, and allows for growth and repair.”

U-32 began training faculty to use restorative practice two years ago, and we are still training today. It all started with an interest from Ellen Cooke and Scott Harris (U-32 high school counselors) to incorporate social and emotional learning into U-32’s culture. Both were a part of a social curriculum committee and are training others to use it; Harris will even have a degree in Restorative Practice.

In our school, Restorative Practice has been used to work out a variety of different situations, including bullying and harassment cases, repairing conflicts between students and teachers, and even rebuilding sports teams after an incident.

Many would be surprised at the questions that are asked in a typical Restorative Practice circle, because they are so simple. For example, in a situation where someone has been harmed, some questions that would be asked of the person who caused the harm would be ‘What happened?’, ‘What were you thinking about?’, ‘How do you think they are feeling?’, and ‘What do you think needs to happen next?’. Says Cooke, “This model is not new…It’s used by non-violent communication folks, and the restorative justice models. But they’re largely based off of Native American and other indigenous cultures; ways to solve problems peacefully. It makes so much sense and you don’t have to have a Master’s degree in counseling or justice.”

Cooke also values the sense of equality that restorative practice brings to our school: “ We all get to work with each other instead of to or for. It gives people equal access to use their voice in a safe environment and repair any harm that is done.”

It is clear that one of the most important components of restorative practice is effective communication, but nowadays, with teenagers on their phones most of the time, that can be difficult. “People have to face each other; you have to look at each other. It’s uncomfortable for a lot of people… But if we’re looking at each other we can tell if it’s genuine. We can tell that they were impacted…That’s something that is getting lost with today’s social media; everyone’s online, staring at their phones. Having face to face conversations is not the norm anymore.” Emerson explains.

Among the U-32 teachers trained to use restorative practice are math teacher Jason Reichert and art teacher Adrian Wade. When asked how Reichert incorporates restorative practice into his everyday teaching, he says “[t]wo days a week I have a circle in TA. Sometimes it’s a prompt that I ask them or sometimes it’ll be more casual: ‘how’s it going?’. I try to run a circle at the beginning of every class…I’ve been known to ask for weather reports; if they were a type of weather that would match their mood for the day. Sometimes I ask what they did over the weekend, or what they had for breakfast that morning… I might even ask a series of questions where you stand up to respond ‘yes’, stay seated to respond ‘no’…It’s more proactively than reactively right now. It’s about promoting a positive culture and bringing us together as one.”

It seems as though today restorative practice would be present in many schools in Vermont, but it isn’t. Cooke says, “I knew that I could immediately integrate restorative practice into my practice as a school counselor, but then you have to get people on board, as a school…U-32 will be the first school in the state of Vermont to be run restoratively; that’s the goal. We’re going to put our money where our mouth is.”