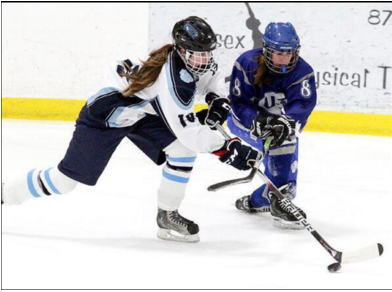 The Girls’ Ice Hockey team here at U-32 has not been one of the leading competitors since they won back to back championships five years ago, but hopefully this season will be their major turning point. The team ended last year’s season with a record of 11–9, but Coach Jeff Wuorinen felt positive about the team’s performance. “We were very competitive last year and we proved ourselves with a couple of close games that we came from behind and won.”

Coach Wuorinen believes that last year the team had a slow start, but they started to pick things up after their overtime win against Missisquoi late in the season. “The major step for us last year was the come from behind win against Missisquoi. We were down in that game, it was close to the end of the game and we tied it up in regulation then took it into overtime for the win. There was excitement for me as a coach as well as the players it really made us believe in each other a little more.”

This year’s girls ice hockey team should be strong; they are returning seven Seniors that have played together for years. They’re also returning three Juniors, and two Sophomores. Jeff explained that one thing that makes them strong is their goalie, senior Chloe Sairs. “This will be Chloe’s second year as a starter. She will play a huge role on the team because a goalie is the most important player on the ice; they see the ice, they can communicate with their defenseman. She has come a long way and with this being her Senior year I expect big things from her.”

The team is also gaining a Junior who previously played for Rice, Jordyn Michaud, who is expected to play a huge role in the scoring aspect of U-32’s game. Peyton Kurrle, a Freshman is joining the team this year as well; she has practiced with the team for the past two years, and the team is also adding three other players that are new to hockey. Everyone is very excited for these new players including Jeff who said, “I think anytime you have a new player and you are trying to create a team culture we emphasize the conditioning, the hard work, and being positive, so you never really know what those individuals will bring to the table. We need all of these new players, and I think they are going to fit in wonderfully with the team.”

The team should be a huge competitor this year. Captain Nell Peterson said, “One thing that we never really realized last year was how good we were.” If the team uses all of their talent this year they should make a major impact. Senior Natalie Lavigne said one thing that really makes this team special is their teamwork. “We communicate and connect well on the ice. We connect passes and work very well together. We just flow as a team very well.”

The team steps on the ice for their first practice on Monday November 16th, and will play their first game against Harwood who was 3–16–1 last year on December fourth during the Dr. Butsch Tournament. U-32 played Harwood three times last year, and won every time.