A Mammoth Debate: When Should Satire Declare Itself? 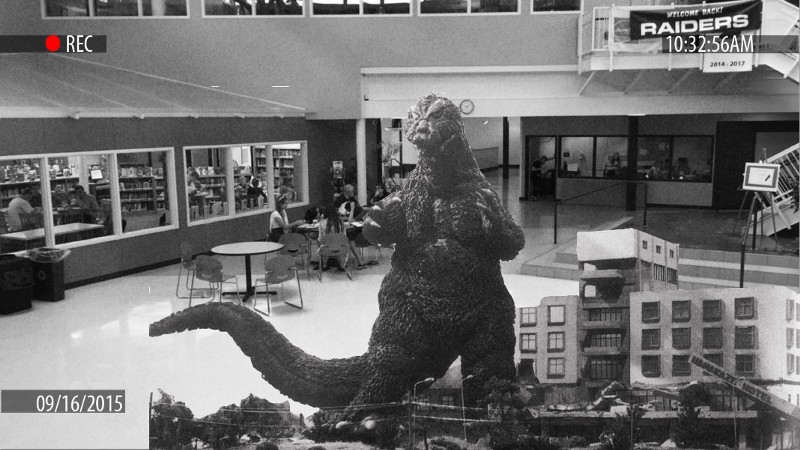 This week the Chronicle received a thoughtful letter from one of our readers, Otto Daniels, who raised important questions about the spoofs and satires published by the staff of the “Woolly Mammoth”. The Chronicle’s editors asked Daniels if he would adapt his letter for submission as an editorial, to post alongside a defense of the Mammoth by its founder, and he generously agreed.

We would like to thank Daniels for his feedback, which has led to some changes in how Mammoth stories will be presented, and we encourage other readers to send us suggestions, or opinion pieces of any kind, in the future.

Daniels’ piece is to the left, followed by an answer from the Mammoth on the right.

When the news broke of the security camera leak on U32’s news site, The Chronicle, people freaked out. A friend of mine was already in protest of the new security camera system installed over the summer and now he thought he had a breakthrough in his argument. When I first heard the news, I was a little insecure myself, thinking that someone has gotten into the camera system and is watching me. 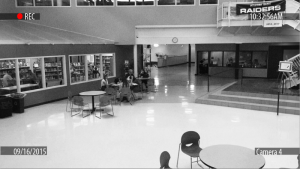 The first “leaked” security still posted on the Mammoth. It was taken to be real by several readers.

Weeks later, I heard about the “discovery” that the press box was a POW camp watchtower. I left a comment debunking the claim. At that point, I finally noticed the tag “Wooly Mammoth”. I looked back at other articles with the tag. These included other ridiculous articles that I didn’t take too seriously, including a follow up to the leaked still. I guessed that the second still was supposed to be satire, based upon the photoshopped godzilla. I then noticed the original also had the tag. Now I was a bit lost.

I sent an email to The Chronicle’s staff asking about the article. While I was sure that some were meant to be satirical or fake articles, I didn’t quite understand if the original leak was real or a spoof, nor did I understand if the Wooly Mammoth was satire or not. As a new reader, it was hard to tell.

Poe’s law comes into play here. It states that unless the author’s intent is clearly stated, parodies of extremism can not be distinguished from the genuine article and vice versa. It does not say that people believe everything they read, it just states people who tend to believe parodies of extremism are earnest. This is especially true on the internet. Text cannot show facial expressions which would indicate a joke.

While the posts by Wooly Mammoth are not parodies of extremism, they do make extraordinary claims, which tend to fall into the same effect. If we hear a claim of leaked footage, we will tend to trust our peers’ news reporting, in this case believing what was an obvious joke to the staff of The Chronicle.

A further discussion explanation of Poe’s law and other such rules on the internet can be found on the PBS Idea Channel here.

The Mammoth is satire. These articles aren’t meant to be taken seriously; the press box wasn’t a watchtower and the security camera leak was a fake. While the authors shouldn’t be punished for their actions, since this is a High School newspaper, I think they should take more precautions in the future to make it clearer that The Mammoth is satire.

In fact, they made it more clear on their recent third article on the security camera footage. At the bottom of the article, one can find a huge image of a mammoth and stating “…It is satire, of course.” This makes it easier to identify.

A news site which posts satire alongside real news can be a slippery ethical slope. When most articles on a site are meant to be taken seriously, one satirical article mislead people without the proper disclaimers. This leads to a few problems.

When a site has your trust, you’re inclined to believe them. Being the school paper, many students trust The Chronicle to give them an in-depth view of major events around the school.

When a site posts false information, regardless of it being satire or not, it can have adverse effects on the readers. Using The Chronicle as an example, people started to feel less secure when we heard of the leaked still. A friend of mine was even using it as a baseline argument for why the new security cameras shouldn’t be in use. Now, we know that the leak was a spoof, and his argument is less valid.

Another historical example would be The War of the Worlds radio play. There was a disclaimer at the beginning of the play, declaring it as fiction. Unfortunately, people tuned in late, and the newscast sounded realistic enough, that people believed it.

Someone could publish misleading information with the intent of manipulating their audience. While it’s unlikely that something like this will happen to The Chronicle, this is still a reminder that it can be hard to tell the difference between journalism with the intention to inform and propaganda with the intention to manipulate. While intentionally posted false information can be disastrous, a prank article that seems obviously fictitious or satirical to the author could also have its own disasters.
Also, keep in mind that the spread of false information, is not protected by the first amendment. It’s like yelling fire in a movie theater, but with a much larger audience.

The articles with the tag “Wooly Mammoth” were all intended as humor. This article itself is meant to be informative and isn’t satire. Just to be clear.

Dear Otto,
Thank you for your input. Here at the Woolly Mammoth we have taken your thoughts into consideration. However, I personally would like to wholeheartedly disagree with some of your points. Here’s why:
I believe that Poe’s Law is a standard to which no one should hold themselves. It’s very unofficial, not enforced by any notable sources, and I believe it limits artistic freedom and expression. 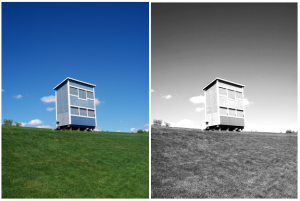 The image from the most-viewed Mammoth post, reporting the “discovery” of U-32’s history as a prison camp.

Do you know what The Onion is? It’s a very well-known satirical website that was created in 1988. The video you provided (here) uses an example of a time when someone had confused fact from fiction. However this could have easily been avoided if they looked at the source: The Onion. (Or looked at any other article on the site, or even the front page, the Mammoth as you may have noticed is at the bottom of our site).

There was very little need to go to the extent you did to try and “debunk” our already fake articles. All you would have to do is see that it’s under the Woolly Mammoth tag line, or even look at another article in the section, you can easily tell it’s satirical by looking at my obituary for Adam Sandler the fly. (If you’d like to read it, click here).

Labelling an article as satirical before someone reads it would defeat the article’s point. Here’s why: imagine you’re hanging with your best buds, talking some talk, and you think of a joke. You wouldn’t be telling it like this, “Okay, guys, I’m gonna be telling you a wicked joke.” You would more go straight into the joke saying, “Hey, who can jump higher than Mt. Everest?”

Putting a satire label on it kills the joke. The real fun is when people partly suspend their disbelief when they read the articles. That’s what The Onion does. I have personally found on the website (Onion) they state that it is satire just once, and only for legal reasons (if they use someone’s name in a slanderous way it is pure coincidence). Yes, it may seem misleading, but that is why it’s important to look at the source.

And before taking any piece too seriously, it’s important to actually read it. Every one of the Mammoth pieces has been loaded with obvious absurdities and shouldn’t have fooled anyone who read beyond the headline.

The Woolly Mammoth section on the website is satire. It is our personal forum to vent stupid ideas, and these articles are popular because it’s what people like to read. Using one’s common sense and lighthearted humor, it’s obvious they are fake.

Lastly, we have taken a lot of time putting together these articles, and we wouldn’t want our jokes to be ruined by a satire label. It is our form of art, and I, as well as my colleagues, wish to continue doing this for the coming year.

Founder of the Woolly Mammoth.