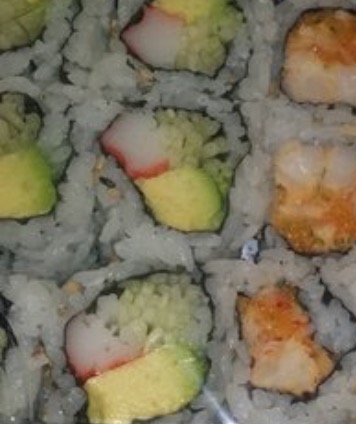 Good sushi in Vermont?  It’s not something you come across very often.

It’s hard to get fresh fish in Vermont, especially in autumn, but Asian Gourmet in Barre seems to do it.  Their California roll and Alaskan roll were great.  Their California roll, with rice, crab, avocado and a stick of cucumber, was great. The Alaskan roll, which just swapped out the crab for salmon, was just as good.  Now I’m no sushi connoisseur, so I couldn’t really tell you if it’s better than any other sushi place. None the less, they were delicious.

The service was great.  It only took three or four minutes from the time I ordered to the time there was a platter on the table.  Compared to other places, this was quite fast, as well as aesthetically pleasing.

The atmosphere was nice, but it wasn’t anything revolutionary. It was a typical asian restaurant with a modern twist.  Your food is served on a clean white plate with a ball of wasabi and ginger slices on the side. The black chopsticks and napkin contrast with the plate, giving it a very elegant look.

The only gripe I have is with the wasabi.  They give you a sugar cube-sized ball of it.  With eight rolls, you would think it would get used up.  In reality I only used a small amount,  a quarter of it maybe.  It just seems like when they serve you something, you are supposed to use it all up. It should be proportionate to the rest of your meal.

I was sadly mistaken. I put a large amount on the first roll I had, using an eighth of the ball.  This was a mistake.  My eyes watered and my tongue was on fire. Was this my fault? Yeah, I guess so.  I should have started small and worked my way up, it just seemed rational to use it all up.  When you look at it from the restaurant’s point of view, it makes sense.  Give them enough so they don’t have to ask for more.

Besides the wasabi incident, it was great.  Their menu was extensive and they had a lot of ways to personalize your plate.  This wasn’t only a sushi restaurant, it was an asian restaurant.  They served a wide variety of food, even for the people who don’t like asian food.  The people were nice, the service was fast, and the food was good, not to mention the price was fair.  Eight rolls for around twelve dollars seems fair for sushi in Vermont.  You can’t ask for much more than that.

But again, I’m no sushi connoisseur.