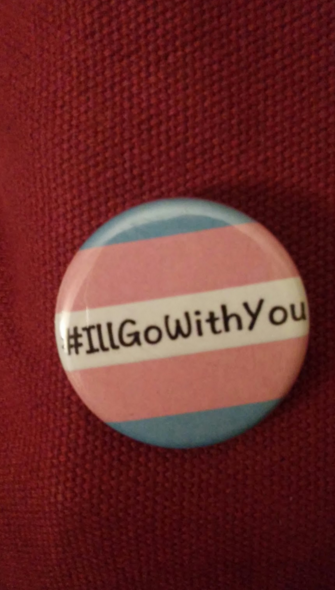 Gay, Lesbian and Many More (GLAMM) is a relatively new organization to U-32. The first meeting was held at the end of last school year, but in that time they’ve already accomplished much.

Similar in nature to a QSA (Queer-Straight Alliance), GLAMM’s mission, according to member Dakota Dunham, “is to provide a safe space for LGBTQ+ students and straight allies. It’s a place where people can go to give support to the LGBTQ+ community.”

A few weeks ago, to honor Trans Visibility Day, GLAMM members set up a table in the atrium and handed out buttons reading “I’ll Go With You,” along with information on how to be an ally. “I’ll Go With You” is a movement to encourage U-32 students to be bathroom buddies for their transgender classmates, accompanying them to use the restroom of the gender they identify as and seeing that they’re safe as they do so.

In addition, GLAMM, in conjunction with the Montpelier High School QSA, hosted a transgender clothing drive for peers transitioning from their birth gender. They’ve also hosted a Day of Silence in honor of LGTBQ+ victims of bullying, and attended a QSA youth summit as well as a youth conference.

While organizations such as GLAMM may be considered controversial to some, member Sammy Darmstadt asserts, “I haven’t seen much negativity [towards GLAMM]. I’ve heard about a few negative comments, but mostly it’s been positive.” While he is optimistic about students’ responses towards the organization, he concedes, “I do think we still have lots of work to do in order to make our school more accepting.”

Member Anne-Marie Mattogno, while never having witnessed any negativity towards the group itself, says, “ There is definitely negativity towards any openly queer people that we talk about every week [at meetings]… People use terms like ‘gay’ derogatorily on a daily basis. Genderqueer people at our school are seriously bullied for being who they are.”

The club aims to create a safe space for these students. “Every meeting,” Mattogno explains, “we go around the table and introduce ourselves and state our preferred pronouns. We also have group confidentiality so anyone who wants to share something that’s personal, they can. It’s really an altogether welcoming experience.”

So what can we expect next from GLAMM? They’re currently hosting a fundraiser so they can hand out resources, like pins and bracelets and fact sheets. They’re also fighting for more gender neutral bathrooms, planning a dance and booking a guest speaker from Outright Vermont. This spring, they’ll attend youth summits, and perhaps even host one here at U-32 in the future.

Groups like GLAMM are crucial to a healthy school community. As Dunham explains, before GLAMM, “there was almost no representation of the LGBTQ+ community in our school… Now that we have GLAMM, it shows people that the community is here and very real and it’s around them even if they know it or not. I believe that applies to any group in school, not just the QSA and that it’s important for all groups to be recognized and heard.”

It’s clear that GLAMM is here to stay. According to Mattogno, the member numbers “have been dramatically growing: at the start of the year, we had five people. Last week, we had around 20.” She “would encourage anyone who would ever even consider coming to show up… The best thing about GLAMM is it’s open to absolutely anyone.”

Straight or gay, male or female or anywhere in between, GLAMM is a safe space. If you’re interested in joining, GLAMM meets every Friday during callback in the LOFT room with guidance counselor Cairsten Beanland.