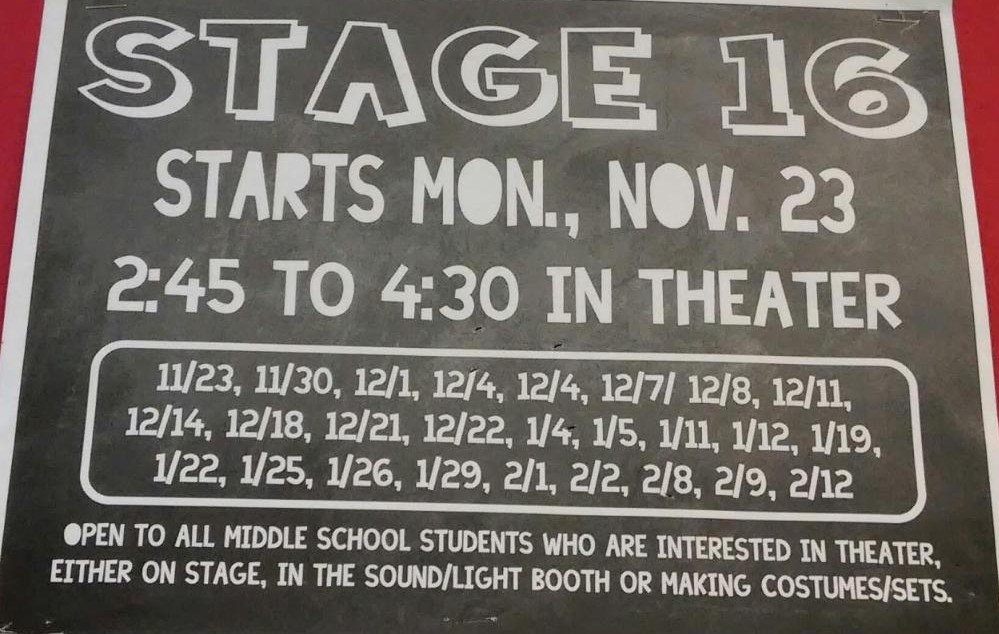 Stage 16 auditions are this coming Monday, November 23rd. Stage 16 is the theater program for middle schoolers here at U-32, which gives them a chance to perform on the U-32 stage. This year, participants, under the direction of high school students, will be putting together and performing the show Excuses, Excuses. Not only will the play feature exclusively middle school actors, the entire technical team (lights, costumes, props, etc.) will consist entirely of middle school students as well. So, if you’re a middle schooler with an interest in theater, either on or offstage, Stage 16 has a place, for you.

Senior Marissa Mattogno, who is producing the show, is feeling very excited about this Stage 16 performance season, especially because this year there are many students interested in tech as well as acting.

While Stage 16 is a lot of fun, it’s also challenging.   According to Mattogno, the group “only has rehearsals 3 days a week… last year I actually did the math, we had a grand total of 42 hours of rehearsal time before we opened – that’s less than half the time we get in Stage 32. There’s a LOT of work to do, on and off stage, and very little time to do it.”

Despite the work involved, Stage 16 is still a great way to spend your afternoon. Just ask freshman Lily Mattogno, who participated in the program last year as an actress in This Is A Test. She remembers her time with Stage 16 fondly, saying that “it’s a great place to make friends and have fun experiences with new people… everyone in the theater is so caring and nice.”

This season promises to be just as fun. For anyone still on the fence about joining the program, Marissa Mattogno “wants students to know that if they’re interested, then they should do it… Don’t be scared… Come in, try something new, and just remember that you’re going to come out of the show with a whole new skill set. Definitely worth it.”

Auditions are this coming Monday from 2:45-4:30. If you have any questions, contact Marissa Mattogno at mmattogno16@student.u32.org